January 23:  US B-52 bomber with nuclear bomb on board crashes in Greenland

January 23:  Vietnam War: Battle of Khe Sanh – One of the most publicized and controversial battles of the war begins.

The trouble started with the Pueblo. It had been nearly 15 years since the Korean War between U.S.-led forces and the North. The Navy intelligence ship was monitoring North Korea from the Tsushima Strait, an ocean channel dividing Korea and Japan.

In many ways, the bloody Tet Offensive signified the beginning of the end of U.S. involvement in the Vietnam War.

The coordinated attack by 85,000 Viet Cong and North Vietnamese targeted 36 major cities and towns in South Vietnam. It caught U.S.-led forces by surprise.

The Rev. Martin Luther King Jr. was standing on the second floor balcony of room 306 at the Lorraine Motel when he was struck by a bullet at 6:01 p.m.

The 39-year-old civil rights leader was rushed to nearby St. Joseph’s Hospital but never regained consciousness. He was pronounced dead at 7:05 p.m.

Just two months later, Kennedy himself was gunned down by an assassin at the Ambassador Hotel in Los Angeles.

The attack took place shortly after Kennedy had wrapped up a speech in the hotel ballroom. As he cut through a kitchen corridor on his way to another part of the building, a Jordanian born Palestinian named Sirhan Sirhan opened fire, hitting Kennedy in the head and back.

Kennedy collapsed and was rushed to the hospital, where he underwent brain surgery. Twenty-six hours after the attack, Kennedy died. He was 42.

When demand for air travel reached sky-high levels in the 1960s, the world’s then-largest passenger aircraft — the Boeing 747 Jumbo Jet — was a game changer. The ability to carry far more passengers than previous airliners suddenly made globetrotting a feasible option for would-be wanderers who previously thought they would never afford such exotic sojourns. 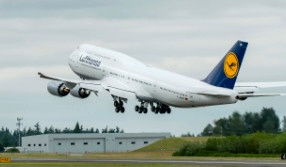 Boeing continues to produce new versions of its historic 747 model airliner more than 40 years after the original. This 747-8 Intercontinental was the 1,500th to come off the production line earlier this year.

The massive aircraft was indeed an aviation design milestone. More than six stories tall, it seated 374 passengers and weighed 300 tons.

October 16: U.S. athletes take a stand at the Summer Olympics

During the 1968 Summer Olympics in Mexico City, two black athletes staged a silent demonstration against racial discrimination in the United States.

For the simple defiant act of raising their fists during the National Anthem, the International Olympic Committee condemned American medalists Tommie Smith and John Carlos. 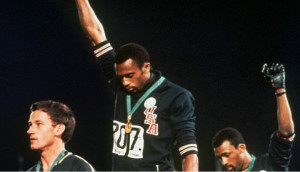